by rgarland
with no comment
JournalPressOne MomentRob Garland Photographs

Doc Watson is one of the true pioneers and legends of bluegrass music.  As a lover of many types of music, it was an honor for Dr. Gustavson to use my image taken at The Paramount Theater in Charlottesville, Virginia as the cover photograph for this book.

Quoted from the author:
Blind But Now I See: The Biography of Music Legend Doc Watson is the winner of the Best Biography of 2010 from the Next Generation Indie Book Awards, and a Finalist for 2010 Foreword Book of the Year in the Biography category.

From the day he stepped off the bus in New York City, Doc Watson changed the music world forever. His influence has been recognized by presidents and by the heroes of modern music. This is the first comprehensive biography of bluegrass great hero, flat-picking legend, and the man who brought Amazing Grace into the public consciousness. 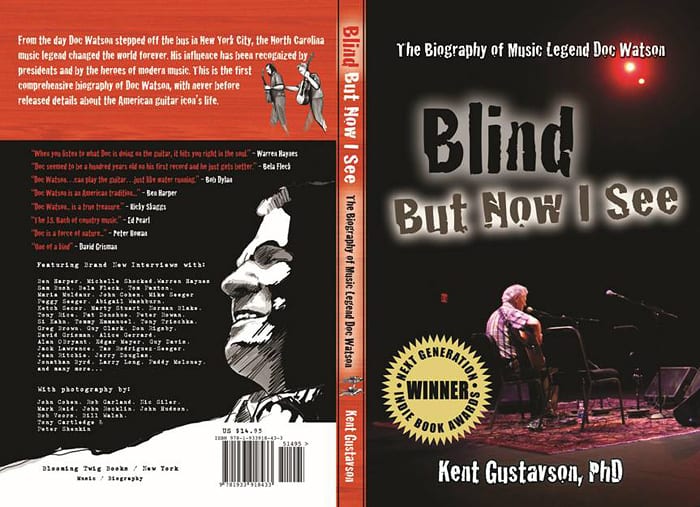 To order a copy of the book, please visit: Blind But Now I See – Amazon.com

About the author: Dr. Kent Gustavson earned his PhD from Stony Brook University in New York, where he now teaches music, leadership, and language. He speaks around the world on both music and publishing, and has interviewed hundreds of award-winning musicians and authors for his radio show Sound Authors. Dr. Gustavson has released more than a dozen audio recordings on his small independent record label Ninety and Nine Records. He lives and works in Sound Beach, New York.  Find out more at www.kentgustavson.com

“If you’re a dedicated Doc Watson fan, I think you would find this book an interesting read. It does get into some darker areas of Doc’s life, such as Merle’s death, but it also is a celebration of the man through the eyes and ears of those who know him.” – Steve Carr, docsguitar.com

“Hard to believe it’s been 50 years since Ralph Rinzler first introduced guitarist Doc Watson to the larger world. It’s a fitting anniversary for the first book-length biography on Doc to appear. It was long overdue. This is a valuable, anecdotal work anyone interested in Doc’s music and life will enjoy reading.” – Bluegrass Unlimited

“This is a highly informative, fascinating biography of the great Doc Watson. What a life. It’s a page-turner that will keep you up past your bedtime. Don’t miss it.” – The Inland Northwest Bluegrass Association

“A very well researched biography…  The story of Doc Watson’s life is one of tragedy and success.  The author provides a vivid image of Doc’s early childhood [and his] years with Merle, and gravely describes the impact of Merle’s untimely death. The book is hard to put down…” – Tom Duplissey, Bay Area Bluegrass Association

“Musicologists will appreciate the chapters on Doc’s singing style and guitar work… Music fans will delight in the book as a whole, a splendid recounting of Doc Watson as man whose ‘…approach to folk music on a guitar was like Horowitz’s approach to the piano…'” – Gary Presley, The Internet Review of Books