by rgarland
with no comment
One MomentRob Garland Photographs 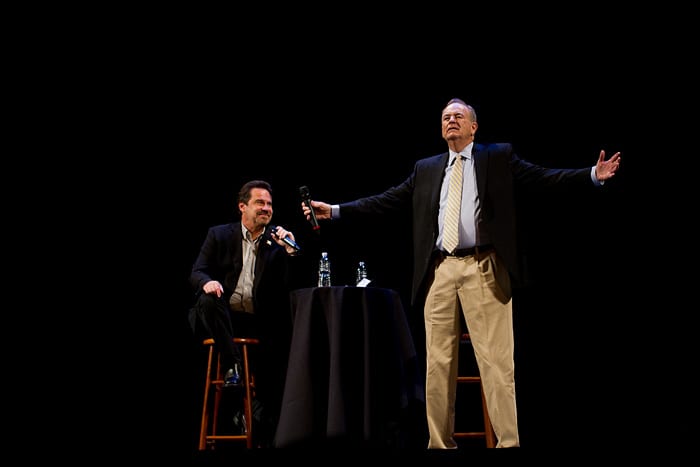 Always an interesting tandem, Bill O’Reilly and Dennis Miller performed at The Landmark Theater in Richmond, Virginia last night and I had to throw in a piece from the show.  The Landmark Theater has a rich tradition in our family.  The last time I attended a show at the Theater was in the 1980s where we were fortunate enough to see Chuck Berry perform from the second row.  Somehow, I was pulled up on state during his encore and ended up dancing beside the legend during a performance of the classic, Johnny B. Goode.  Tonight’s show didn’t disappoint – Mr. O’Reilly and Mr. Miller were entertaining, funny, and provided their own political insight.  The host of “The No Spin Zone” and Saturday Night Lives former weekend update anchor came to down with the expected wittiness and clever showmanship these two are known for.  We were fortunate enough to have VIP passes and enjoyed chatting with the two of them after the show.  I brought my dad to the show and you can view the photo of the two of us by clicking on the following link:

I had the pleasure of seeing Dennis Miller perform at Radford University when I was in college and he ranks as the first celebrity I ever photographed professionally.  In case any RU alumni were interested, Dennis Miller proudly wore the sweatshirt given to him that evening for many years.

The Landmark Theater has a rich history.  My father has seen quite a few artists in the theater when he was at the Medical College of Virginia including Otis Redding (Dad and I sat in the same seats this evening), Sam & Dave, and Bob Dylan.  The theater was built in 1926 by Shriners as their Acca Temple Shrine and was purchased by the city of Richmond in 1940.  Many of you may remember that the original name was The Mosque.  If you are interested in any Mosque history, the famous “kiss” photo that was taken of Elvis Presley and a mysterious young lady (unknown until recently) by Alfred Wortheimer can be seen by clicking on this link:

Elvis Presley at The Mosque (aka The Landmark Theater) in Richmond, VA – June of 1956

In 1994, the Mosque made national news as Frank Sinatra collapsed onstage: Sinatra Takes a Fall – People Magazine – this was one of Frank Sinatra’s last concerts performing his final public show in December of that year.  The theater hosts many events and has separate ballrooms for rental.

An interesting history of The Mosque, by Scotty Moore, can be read by clicking on the link below: