by rgarland
with no comment
JournalWeddingsOne MomentRob Garland PhotographsGreenbrier Weddings 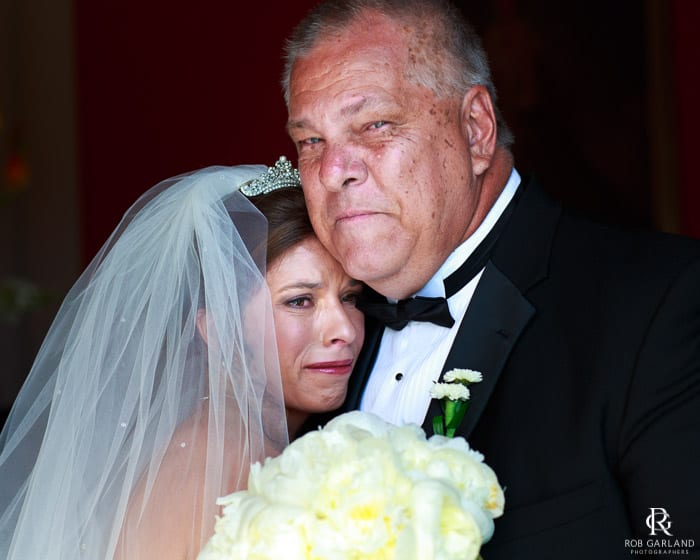 I absolutely love this photo-journalistic portrait that was taken just before Dawn processed down the aisle for her wedding at The Greenbrier in White Sulphur Springs.  I was changing positions and noticed that she and her father were in beautiful lighting next to the door, both in tears. They are wrapped up in the moment.  To me, this is simply beautiful.  I love that she is seemingly unaware of the camera and he is unaffected by my presence.  Greenbrier weddings are simply stunning, as there is such a beautiful backdrop everywhere you turn.

The Greenbrier stands in an area that was previously a forest and the Appalachian Mountains. Many generations have attended events at the Greenbrier and stayed at this lavish property. During the mid 1780s the Greenbrier was simply log cabins in tents surrounding the springs. Many white oak trees around the property that are over 300 years old. The sulfur water has long been thought of as a treatment too many things including rheumatism. There are many tourist attractions around the Greenbrier including, the humpback bridge which is near Covington Virginia and is a part of the James River. One of our favorite places is also such a Greenbrier cliché, the springhouse. Such a magical place with such history. Many presidents have visited the Greenbrier. When we were married, we stayed at top-notch estate which was frequented by President Richard Nixon during his term as president. Crowds will gather around the springhouse for various events throughout the year, including many of the wonderful Greenbrier weddings.

My wife, Maran, and I were married at the Episcopal Church near the Greenbrier and had our reception in the Cameo Ballroom. It has such a nice flavor and openness to it and is the perfect size for a midsize wedding of 150 people. My grandfather, Robert A. Garland Sr., loved attending, as did my immediate family and in-laws. There are many places to visit including Sweet Springs, 20 miles south of the Greenbrier. Sweet Springs was designed by Thomas Jefferson.

President John Tyler honeymooned in 1844 at the Greenbrier. In the mid-1800s, you might receive a bill for approximately $40 for four people to stay at the Greenbrier, a far cry from what we would see with today’s pricing structure. There was a Civil War battle near The Greenbrier. The battle of Drycreek in the bottle of White Sulfur Springs are one in the same. Captain DuPont saved the resort from fire in 1864. If you were a student of history, you might know that it was very common to arrive at The Greenbrier by train. The horse and cart would carry you to the Old White Hotel, and later The Greenbrier. Teatime is also an classic occurrence that lives on to this day. There were many cotillions and lawn parties at The Greenbrier. The grand resort hotels thrived as railroads expanded. This also made the grand resorts accessible for middle-class folks. Virginia Rail was a famous set of cottages on property. It was torn down in 1930. William Howard Taft visited when he was campaigning for president in 1908. The present day version of The Greenbrier didn’t open until 1913. One of my favorite photos that I’ve seen at The Greenbrier is an image of Lou Gehrig, the Yankee great, playing golf at the resort. Many other dignitaries have visited including the prince of Wales. Many exhibition matches have been at The Greenbrier from boxer Gene Tunney to tennis great John McEnroe. Condé Nast, the famous publisher of vogue, played golf in October 1933. Woodrow Wilson attended the opening of the presidents cottage museum on August 22, 1932 along with Henry Taft. In 1933, there are photos of fashion shows at the indoor pool. The parade of wedding fashions was one of those wonderful photographs. No one can mention celebrity or society at The Greenbrier without talking about the Greenbrier‘s golf pro, Sam Snead. He was a lifelong resident of the area. Did you can Duchess of Windsor also attended, celebrating the reopening of The Greenbrier after World War II. Dwight D Eisenhower visit in July 19 45, and we certainly can’t mention The Greenbrier without mentioning the considerable influence of interior designer Dorothy Draper. You can always visit Dorothy draper is Victoria in writing room, which has remained. unchanged for years. Ben Hogan played golf at The Greenbrier. Being Crosby entertain guests at the grand reopening. Gary player enjoyed time in the 1959 Greenbrier open as Bob Hope did at the 1953 Spring Festival. Sam Snead scored the lowest total in a round of golf in his career at The Greenbrier, a 57! The Reverend Billy Graham played golf at the Greenbrier as well. Princess Ggrace and Prince Rainier attended with their children in April 1963. Debbie Reynolds honeymooned on the property, and Carlton Varney is obviously a regular attendee. Top Notch Estate was originally designed as a summer home for George Stephens, who was the president of the C&O Railway. My Family stayed at top-notch state during the weekend of my wedding. Greenbrier weddings are so fantastic and we certainly enjoyed our time during our own personal nuptials. Another news worthy event was the arrival of former Iranian hostages in 1981, a few months after their release. Tom Watson is the present day golf pro emeritus. I personally had the chance to run into Lee Trevino and share a few stories. Colin Powell has attended, as well as President George W. Bush. We certainly can’t mention The Greenbrier without the famous bunker.  I had a chance to photograph a wedding within the bunker many years ago.  I’ve also had the chance to photograph a 70th birthday party an the various weekend events that occurred at The Greenbrier as well as The Sporting Club.  The couple had their Greenbrier wedding on the property as I had the wonderful opportunity to document their wedding as well.  It was a grand affair.  I can’t say enough how much I love documenting Greenbrier weddings and certainly hope to continue having that wonderful opportunity.  My wife, daughter, and I stayed at The Greenbrier when I was speaking to a bankers convention about photography.  Many thanks to the wonderful people I’ve had a chance to work with at the resort over the years.  Enjoy.

Rob Garland is the owner of Rob Garland Photographers, an award winning Charlottesville wedding photographer that specializes in wedding photojournalism and fine art printing. Rob prides himself on a classic, intuitive, heartfelt documentation with the utmost in visual integrity. He has documented many destination weddings throughout the U.S. and abroad as well as Charlottesville weddings at many of our outstanding local venues. Rob loves imagery that fails to go in and out of style and personal touches that make each wedding unique.